My friend who came to stay: ‘Are you still running?’

‘My trainers are broken so I’m waiting to get paid, and then I’ll have to wait for Runners Need to have a sale so they aren’t more than £40. Then I can go for a run.’

‘Seems a bit of a long wait. I think you are worth having new trainers to go for a run.’

‘I also think I’m worth it, but my bank balance disagrees.’

My mum: ‘Have you bought a new laptop yet?’

‘Your laptop is eight years old, on its way out, and keeps freezing. I thought you needed a laptop to start training for a new job?’

‘But my savings are to go towards a deposit for a mortgage!’

‘So dip into them and pay it back!’

‘But I already dipped into them in July when our funders said no so I could loan money to my theatre company and I haven’t paid that back yet because I need to re-do an 80 page application form to try again for funding.’

When it comes to money I am NOT good at playing the long game.

It pains me to buy makeup when I’ve run out. I force myself to remember that, as an actress, I am the product I sell, and if I get that hair advert I will be swimming in bareMinerals make up for the rest of my days. Once I saw, five years after graduating, that my student loan had gone up by 11%, not the 2.5% interest I was promised. My blood pressure went sky high, I panicked, and paid it back in full as quickly as I could (They didn’t want to take the money so I sent a cheque to force them to put it in.)

I live in fear of spending and owing money – whether I have it, or not. A few years back I called my friend in swarms of guilt.

Me: ‘I went to WHSmith and I bought nine books.’

‘It was three for two, but I spent £42 on books! I could have just gone to the library.’

‘Babe, do you know how much people our age spend on coke? You haven’t done anything wrong. You just bought some books to read, you didn’t hurt anyone. It’s okay.’

Perhaps it all comes from me being scared to take risks and mess up?

The trouble with having an over-active imagination is that I can all too easily see myself, Tiny Tim style, being on the brink of homelessness, with the debt collectors knocking at my door. But ultimately, in not speculating to accumulate, I lose out. I’ve lost out (so far) on a month of running because I have no trainers. Because I don’t have a working laptop, I’ve caused a six month delay in starting a new online acting job. I know that, once I’m up and running on it, will give me the freedom to live anywhere and still have a regular income, so why have I been stalling?

Financial risks I have taken that worked out:

The fact that there is an 11 year gap between these two things is somewhat worrying. So, I’m going to buy a laptop and some trainers this weekend (it hurts to commit to this in writing but it’s the only way I will actually do it), and let the world be my oyster…

Financial risks others took that worked out: 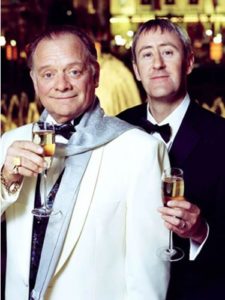 Del Boy and Rodders – over a number of risks and crazy financial schemes by the end of the Only Fools and Horses series, they ended up as millionaires.

How well do you know PayPal?

So you want to be a writer?

The not-so-obvious things that can damage your credit score