We all know it’s a good idea to save into a pension while we work so that we have enough money to enjoy retirement.

But how much do you need to save exactly? And how do you know if you’re on track?

Although there isn’t a one-size-fits all answer to that question, there are various theories about how much you need for a comfortable retirement.

Here are just three to give you a rough idea.

One theory, from investment company Fidelity, is that you should hit certain savings milestones, based on your starting salary, as you go through your career.

Fidelity believes you should have saved at least:

After that, Fidelity believes you should save multiples of your starting salary by certain milestones.

Find out more: If you’re 18 – 29, we want to hear from you! By taking our quick survey, you’ll be in with a chance of winning a £100 shopping voucher from your choice of Amazon, John Lewis or M&S – plus four £20 vouchers up for grabs too.

Of course, this is merely the minimum recommended. The more you are able to save, the more money you will have in retirement.

Two-thirds of your final salary

Another school of thought is that you will need roughly half to two-thirds of your final salary a year to live on in retirement.

That’s fine, but when you are in your twenties or thirties, however, it will be very difficult to guess what your income may be by the time you’re in your late 50s or early 60s.

According to a recent Which? study, the average couple needs an income of £18,000 a year to cover the essentials, £26,000 a year for a comfortable retirement and £41,000 for a luxurious retirement.

Combined, most couples will receive £16,300 in state pension if they qualify for the full amount. So you need to save into a workplace or private pension — or both — to make up the difference.

According to Which?, to achieve an annual salary of £26,000 you would need to have saved a total of £154,700 if you were to draw an income from your pot in retirement or £265,420 if you plan on buying an annuity, which pays a guaranteed income for life.

Digital wealth manager Moneyfarm has a simpler theory. To get a retirement income of £19,000 a year, it says, you’ll need to hit retirement with £266,000 in savings.

To achieve that by age 66 (the current retirement age), you’ll need to save £300 a month for 31 years (starting at age 35) and earn at least 5% on your pension investments.

For example, a person who started saving when they were 23 would only need to save £150 a month to hit £266,000 by the time they retired, assuming they earned the same 5% a year on their pension investments.

However, these figures are just a guide. You may need a lot more to get by in retirement, in which case you’ll have to save more every month. There is also no guarantee that you will achieve 5% a year on your pension investments.

The truth is many people have no idea the amount of money in their pensions and don’t think often about how much money they’ll need in retirement.

However, spending a little bit of time working that out can pay dividends in the long-term.

The best course of action is to start early in your career and to save as much as your finances allow.

If you hit your 40s and 50s and think you haven’t saved enough, don’t panic and bury your head in the sand. Get help. A good financial adviser will be able to help you create a road map that will get you back on track.

If you can’t afford financial advice, then try the Government’s Pension Wise service, which offers free and impartial guidance about pensions.

Be aware though, Pension Wise doesn’t offer full advice where someone will recommend a course of action to you. They simply give you pointers and point you in the direction of useful resources so you can make up your own mind. 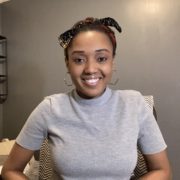 Diandra Latibeaudiere-Gardner 'Finance Dee' is a 28-year old British-Jamaican living in the SE of England. By day she's a research consultant and by night a finance YouTuber and FIRE blogger

Fancy becoming a Digital Nomad? Here’s what you need to know

Bulb Energy customers… sit tight and do nothing

Deal of the week: Free airport lounge access for your whole family if your flight is delayed