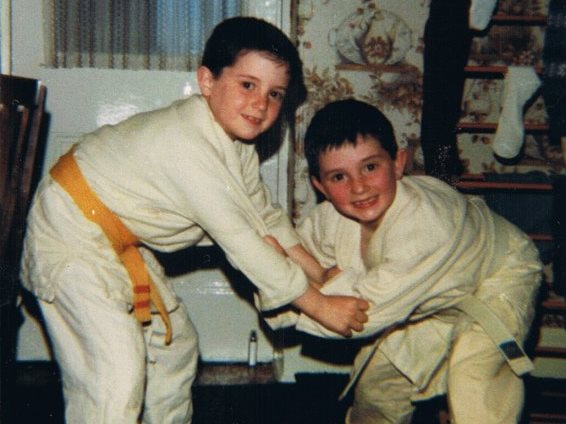 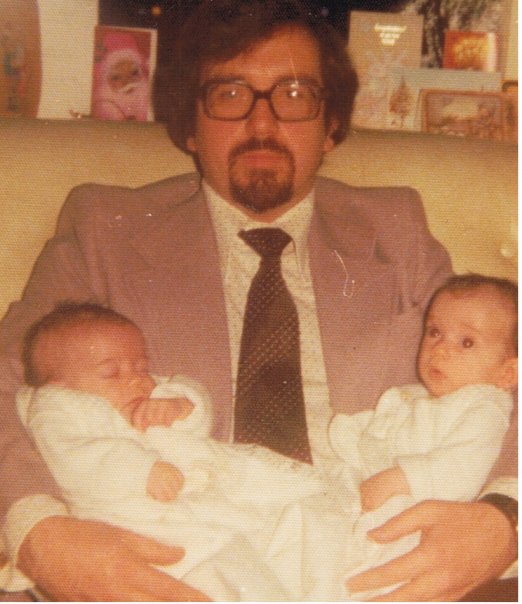 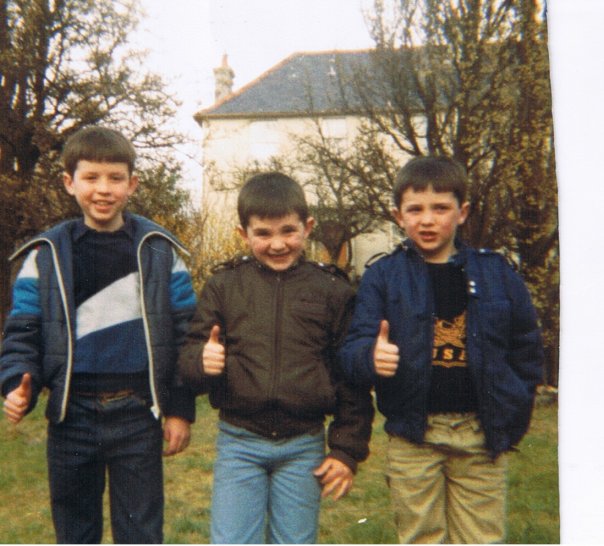 Two eight year old pen thieves, circa 1983 (we think Michael is on the left but can't be sure)

Pen thieves and their older brother (that's Michael on the right...probably)

When I was eight, I opened a Lloyds bank account.

I remember my twin brother and me in the Plymouth city centre branch, on tip toes, trying to work out how to steal the strange pen fixed by a chain to the wooden counter (you were allowed to kill trees in those days) as my dad filled out the forms.

Half an hour later, back at home with our older brother and our mum, we were proudly showing off a pair of brand new plastic piggy banks and paying-in books that would never be used for their intended purposes.

I recall very clearly my dad ruffling my hair that day (okay, he probably didn’t ruffle my hair) and passing down the following knowledge in a Glaswegian baritone that flowed with self-confident wisdom: “Son, you should stay with the same bank as long as you can because, when you’re no longer a wee boy and you need a mortgage, you’ll find they value loyal customers.”

I closed that Lloyds account exactly 10 years later, having never troubled it with a deposit. Then, when I needed to borrow £160,000 for my first home after another decade, a newish financial institution called Northern Rock, with whom I had never banked, helped out. When I say “helped out”, I mean the lender virtually begged me to borrow £176,000 (“you’ll need furniture, sir”) in something called a “sub-prime mortgage”, before promptly going belly up. Result! Don’t ask me how the excess £16,000 was spent. Suffice to say, I was still watching the TV in a canvas fishing chair five years later.

Loyalty in consumer financial services doesn’t exist. I didn’t need to give it to get my first mortgage. You won’t either. Product providers don’t particularly ask for it and they certainly don’t reward you for it. The industry used to lie about the value of loyalty – but they can’t even be bothered to do that anymore.

So don’t assume that you’ll get treated better the longer you are a customer. In fact, you’ll almost always get treated worse than new customers, who’ll get all the best offers as enticements to sign monthly standing orders.

I was reminded of the Great Lie of Loyalty this weekend, at the end of a visit with the in-laws in Yorkshire. Full of Terence and Joy’s tasty Northern breakfasts and in good cheer, my wife and I prepared to set off on the five hour drive home to Brighton, when I remembered the insurance had run out on the car – literally a few hours earlier.

There’s more chance of me reversing my car blindfolded the whole way to Yorkshire than claiming on my motor insurance.

We’d bought a Mini Cooper on the Never-Never a couple of weeks before and had been given a fortnight’s free cover to give us a few days to make new arrangements with our normal insurer, Tesco. The temporary insurer, Allianz, had also snuck a quote for annual insurance into the paperwork – only £241 – and had promised to pay any cancellation fee Tesco might levy if we jilted them for Allianz.

Let me be clear: there’s more chance of me reversing my car blindfolded the whole way to Yorkshire at some point in the next few years than there is of me making a claim on my motor insurance.

So it seemed obvious to me that Tesco would undercut Allianz, especially as I’d barely even phoned Tesco Insurance – barely even thought about that company – let alone claimed for anything in my nine years as a customer. But the quote was £780! More than triple the Allianz quote. It doesn’t need saying but I hung up the phone indignantly, secretly pleased I’d have something to be outraged about for the next five hours.

I know you weren’t talking about car insurance, Dad, but I invite you to be appalled at the death of the ancient norms of commerce: loyalty and reward.

If you haven’t guessed already, the moral of this story is that you should never – EVER – presume you’ll get the best renewal quote from the company that is already providing you a financial service. There’s bound to be something cheaper out there. The mind boggles when I consider how much I have squandered by not having been told about this system years ago – so this unhappy knowledge is my gift to you.

And I have a message for Tesco too. You know those small pens you have in your stores – the ones people use for the National Lottery? You should probably start chaining them to the counter, like the banks do – because I intend to steal them one by one, store-by-store, until I have extracted a value in biros that is equivalent to the hundreds, possibly thousands, of pounds I have overpaid in car insurance over the years.

Why you should never borrow money from a friend

DIY disasters: why it's time to stop putting off the odd jobs