For years and years I put off volunteering with various excuses:

‘I did six charity gigs last year as a singer.’

‘I work for free enough in the arts industry already!’

‘I can’t commit to a weekly thing.’

But when it’s the biggest refugee crisis since WWII and there are 10,000 people suffering pretty much on your doorstep, you can’t help but help.

I got back last night from volunteering for L’Auberge des migrants in the warehouse for the Calais refugee camp with four friends. With 10,000 people (including 1000 children) facing eviction from the camp without proper measures in place to re-house them, and without the UK taking the 400 unaccompanied children that they are legally obliged to under the Dubs amendment, the charities on site need all the support they can get.

During our time in the warehouse, two of us put together 2708 rucksacks ready for the impending eviction and these were distributed the next day.

We set off from the UK at 3:30am (which meant a 3am start). With a roof rack full of backpacks and phones donated by family and friends, we drove to Dover to get the boat to Calais. Luckily we were allowed in by border control – they have been turning away people with trucks of donations as apparently blankets, sleeping bags, and food are very threatening, don’t you know – we were in a car so I think that’s why we got through. We volunteered alongside brilliant and kind people, including speech therapists, members of the military, teachers, and charity workers. We could not go inside the camp this time as tensions were high and the police were using tear gas so it was too dangerous. Two of our group took some of the children and their mums bowling to get away from it all. One of our group sorted through all the clothing donations. During our time in the warehouse, two of us put together 2708 rucksacks ready for the impending eviction and these were distributed the next day. They are planning to destroy the refugee camp and keep changing the date on this, though how they will make 10,000 people disappear I have no idea.

All the refugees I met were extremely polite and grateful. The children played with us and the adults stayed to queue to thank us even when we had run out of food packages for them and their families.

It was my second trip – having gone for two days in 2015. Last year, I worried it would be dangerous before I went and that I would have nothing useful to offer but how wrong I was on both counts. Firstly, all the refugees I met were extremely polite and grateful. The children played with us and the adults stayed to queue to thank us even when we had run out of food packages for them and their families (on the same day a certain newspaper reported there was a riot as we did this distribution. There wasn’t, but politeness apparently doesn’t make for a news story). Secondly, I realised that I did have skills; I’m nearly fluent in French so I could translate for the French volunteers (80% of volunteers are British so the warehouse is mainly run in English) and speak to the gendarmes to get into the camp; I’m half Moroccan so my tea pouring expertise came in handy when pouring soup for three hours straight to feed a quarter of the camp their one hot meal for the day; having the ability to stay awake with tonnes of energy despite sleep deprivation because feeling useful and active actually increases endorphins and adrenaline.

18 children went missing recently, due to the Dubs Amendment not being carried out which sadly probably means they have died or have been trafficked.

My first trip cost £40 because I stayed overnight in a hostel. My second trip cost £20 (£15 petrol and boat fee, £5 dinner) as we got there and back on the same day. The charities provide you with an amazing and delicious hot lunch from the Ashram Kitchen.

I spoke to the charities we volunteered for and asked what the best things we can do right now are. Here is the list:

• No money, time, or donations to give? Write to your MP and get them to put pressure on Parliament – it’s not just for the French government to deal with, after all. If our government can afford £20 million for a fence, surely it can afford to help people with a legal right to asylum in the UK so that they don’t kill themselves by crossing illegally from Calais to Dover. 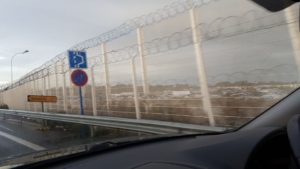 • A bit of a hoarder? Order and send backpacks or smart phones (ideally unlocked and with a charger) to the Calais warehouse (here is the amazon wish list).

• Time poor but can spare a little change? Donate money – It is vital that refugees being evicted are given a phone. 18 children went missing recently, due to the Dubs Amendment (hundreds of unaccompanied children being granted asylum in the UK where they have families) not being carried out which sadly probably means they have died or have been trafficked. 129 children went missing when they demolished some of the camp in February. If they have phones and credit, at least they can contact the charities if they are in danger.

• Can’t get to France? Go remote! Support from home by emailing: calaiswarehouse@helprefugees.org

• A child not yet old enough to volunteer (you need to be 18+)? Look at the lovely message that was sent inside this donated backpack from a school child in Scotland: 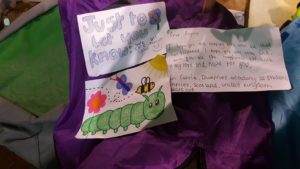 Costs of living in Scotland vs England

How to make your makeup last longer: tips from a former Avon rep