I have no talent whatsoever when it comes to crafty tasks but sometimes, when your children’s school gives you two days notice for a dressing-up day, needs must. So gather your scissors and sticky tape, and read on…

I made a cute pumpkin costume for my son using a strong piece of cardboard, orange material (I used a fleece blanket we were given on a flight), black and green marker pens, and judicious use of a stapler. I strapped the finished ‘pumpkin’ over his shoulders sandwich-board style (you could make a board for the back if you have spare material, but it makes sitting down very tricky). Cut the cardboard into the shape of a pumpkin, cover the front with fabric and staple/tape it into place on the back, and draw details on with a pen. Cut leftover cardboard into a hat shape with a narrow band around the bottom to sit securely around his head. Colour it green, and carefully cover any staples with sticky tape so that they don’t catch on skin or clothing. My son wore green and orange coloured clothes underneath to complete the pumpkin look. 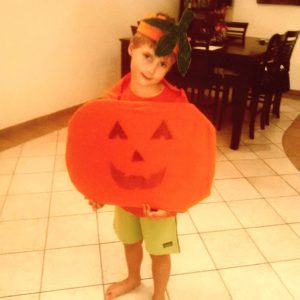 Every year, World Book Day (or a similarly literary themed day) sends us parents racking their brains and bookshelves at home for inspiration.

The range of Mr Men and Little Miss characters lend themselves well to DIY costumes. With some cardboard, scissors, and a little help from Google Images, I’ve made some easy last minute winners. They have the advantage of being instantly recognisable, too. Is there anything more soul destroying than being asked ‘so who have you come as?’ repeatedly throughout the day?

Every year, World Book Day sends us parents racking their brains and bookshelves at home for inspiration.

Mr Messy was created using a plain white t-shirt as the base, onto which I drew a smiley face using a black marker pen. I sewed red washing line cord onto the t-shirt in curls and tangles, mimicking Mr Messy’s fabulously chaotic bundles of hair. Done!

Mr Strong is another cardboard-based costume; keeping the shape rectangular, cover with red fabric, tape and staple. Mr Strong’s green hat was made in the same way as the pumpkin leaf ‘crown’ above. Details can be drawn on using marker pen. I stuck on two egg-shaped white fabric pieces and coloured in their yellow ‘yolks’. ‘The more he eats the stronger he gets’, as the story goes… 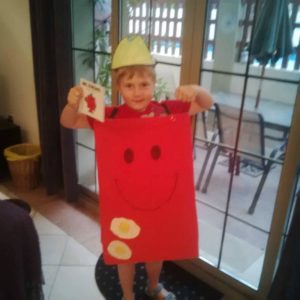 Preparing for a Roald Dahl theme day at school, my son turned to The Witches for ideas. We used a mouse mask he had made himself and ‘modified’ it, adding cardboard whiskers (there’s that stapler again) and a long, pointed pink nose (more cardboard). I stuffed one leg from a pair of tights for his tail, and cut a bottle of ‘Formula 86 Delayed Action Mousemaker’ from cardboard, which my son coloured in a suitably noxious purple colour using felt tip pens. 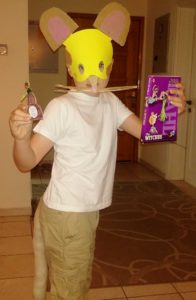 Dr Seuss never fails to stoke the imagination. A simple red t-shirt can turn any child into Thing 1 or Thing 2. Cut a circle from white paper, draw in the number ‘1’ or ‘2’ and glue onto the front of the t-shirt. A can of blue hair spray would do the job nicely but we had a multi-coloured wig lying about (as you do) which I sprayed blue for maximum impact. 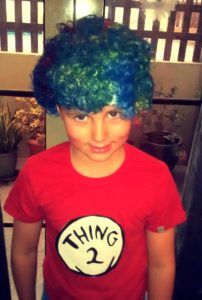 Clare Lawrence, nicknamed 'Coupon Clare' at college, lives mostly in Cornwall. Proud mum to Gregory, she'll stop at nothing in her quest to save cash!

A taxing problem: Why are we still paying tampon tax?

Booking a craft fair stall? Here are your checklist musts