Sometimes you get an idea so incredibly simple that you wonder how you didn’t think of it earlier.

That’s what happened to me when, in 2004, I devised a way to combat identity fraud that almost anyone can use – and for free.

Around that time, identity fraud was rife and was very much a hot topic of discussion in the money pages of the national press, perhaps even more than it is today.

But despite this, I remember asking myself why nobody had come up with an effective solution to help people protect themselves against this sort of crime.

Banks didn’t seem to want to talk about it, the government didn’t have any solutions and the credit reference agencies wanted to charge you a monthly fee for what was, in my opinion, sub-standard protection.

It was then that I came across a pilot scheme in Inverness, Scotland, whereby local retailers were asking people to leave their thumbprint when they paid by card or cheque.

The beauty of that scheme was that if the card or cheque turned out to be fraudulent, the shopkeeper had the con’s thumbprint on record for the police to investigate.

The Inverness results were amazing. Within 6 months the scheme witnessed an 84.3% fall in credit card fraud, a 71% slide in cheque fraud and handbag swiping had plunged 54.5%. While only 30 or so shops put this in place to begin with, the whole city benefited.

That was like a eureka moment for me. If these firms could use thumbprints to stop fraudsters conning them then, surely, I could use mine to ensure I don’t become a victim of identity theft?

And that was when my own thumbprint system was born. From then on, I instructed the credit reference agencies to reject any applications for credit or to open a bank account in my name unless it was accompanied by my thumbprint.

To do this, I added something called a notice of correction to my credit file with each of the major credit reference agencies – Equifax, Experian and TransUnion and recently Crediva.

A notice of correction is a 200-word note that you can leave on your credit file and have it flash up every time a lender or bank pulls up your record.

Typically, they are used to explain an error in your file, or why you may have missed a payment, so the lender can factor this into its decision making when deciding whether to approve your loan.

But as I found out, they can also be used to add extra layers of security to protect yourself against identity fraud.

The best part about this system, apart from how effective it is, is that it is absolutely free to do. The only cost is the ink pad for your thumbprint, costing between £4 – £10 from the internet and pads last for years.

While some firms offer insurance to protect identity theft, in my opinion some of these policies are not worth the paper they are printed on.

And, another thing, why get an insurance policy to help clean up the mess after you fall victim when you can stop becoming a victim in the first place?

With my system, if someone did successfully open a bank account or take out a loan or, say, a mobile phone contract in my name, I could hold the credit provider responsible as they had accepted the application without my thumbprint.

I know that to some people my method may sound a little strange or that it sounds like a lot of hassle. But I am walking proof that it works.

And arguably it has never been a better time to protect yourself, with new cases of identity fraud hitting an all-time high of 190,000 last year, according to CIFAS, the national fraud prevention service.

I put my technique in place in 2004. Since then I’ve taken out a mobile phone contract at the Carphone Warehouse branch in Scarborough’s Brunswick shopping centre. I’ve also used it to open a bank account with Santander and a Debenhams store card, among others.

While the process takes a little longer – say three or four minutes, while the company consults credit control – that is a small price to pay for peace of mind that you are protected against someone stealing your identity.

I understand my system may not be for everyone and that some people will be sceptical about leaving their thumbprint on an application.  But just think about it, your prints will be on a genuine application anyway.

I’m now in a position to force a crook to leave their print if they wanted to pretend to be me, or turn tail and run. More than anything it proves I didn’t make the application. I know the powers in my hands – or thumb.

But if you are worried about having your identity stolen, then I can’t think of a better way of doing so that won’t cost you the earth.

And if there is a better way, then of course I will be the first to try it out. 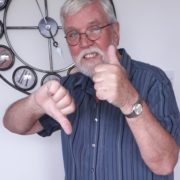 Jamie Jamieson served 25 years in the Royal Navy and 25 at Government Communications Headquarters (GCHQ). Now retired, he’s taken up the fight against identity fraud - so watch out.

Act your age: from millennials to boomers - investment tips for every age group

Deal of the week: Disney Theatre Tickets for £25